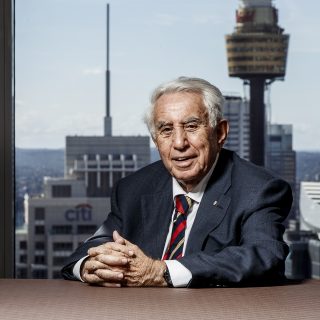 As founder and managing director of Meriton Group, Harry Triguboff has overseen the construction of over 76,000 residential dwellings, and has won numerous awards for his contributions to the Australian property industry.

Harry Triguboff was born in Dalian, China on 3 March 1933. He spent his early childhood in the Russian community of Tientsin (now Tianjin) South of Beijing.

Harry Triguboff became an Australian citizen in 1961. He owned a taxi fleet and a milk run before building his first block of apartments and establishing Meriton at 30 years of age in 1963.

Since then, he has become Australia’s most successful residential property developer and a generous philanthropist, providing millions of dollars each year in financial support to many causes. In recognition of his efforts, Harry Triguboff has received two honourary doctorates and numerous other honours and awards.